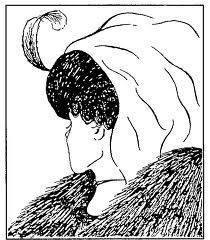 This picture is used in the book "Seven habits of highly effective people", written by Stephen R. Covey, to describe that two people can see the same thing, disagree, and yet both be right. It´s not logical; it´s psychological.
Covey writes: "Each of us tends to think we see things as they are, that we are objective. But this is not the case. We see the world, not as it is, but as we are-or, as we are conditioned to see it. When we open our mouths to describe what we see, we in effect describe ourselves, our perceptions, our paradigms."

This means that we often have disagreements depending on some strange thought that we are right and the other person is wrong, when maybe both are right - due to having different experiences and beliefs.

Finally, which woman do you see? The young, good looking or the old hag? Why?!
Upplagd av Hedin Exformation kl. 23:07 Inga kommentarer: 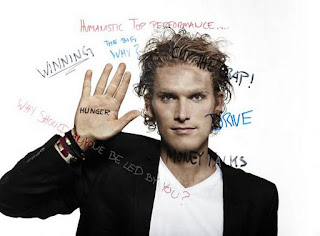 I got help to enter the door to the "Talarforum breakfast seminar" by a hotel employee at Savoy hotel in Malmö. I was 5 minutes late to Rasmus Ankersen talking about "The Gold Mine Effect" due to "eagerness to act child supportive" in the morning (last minute home-work check, helping out with caviar on my daughters sandwich...) and mis-judgement of the weather and traffic situation (removing ice from the front window of my car before being able to drive away, slow traffic on the highway due to a temperature some degrees below zero)... Sitting down I found myself in the middle of the Simon Kjaer story (see video clip further down below)... Rasmus, a former football player that did not make it to the top himself, continued to tell us that he some years ago got obsessed to figure out what it is that creates high performers? Is it talent or is it hard work? (Picture from Keith Bird agency)

To figure out how some of the best athleetes in the world do it, he quite his job and went for a 6 month Gold mine expedition, checking out middle distance runners in Bekoji, Ethiopia; female golf players in Seuol, Korea; football players in Rio, Brazil; sprint runners in Kingston, Jamaica; female tennis players in Moscow, Russia, and 3000 meter steeplechase runners in Iten, Kenya. His observations were that Talent is a tipping point (meaning that you need a minimum level of talent, e.g. long enough to play basket) but it is hard work that makes the difference.

He referred to studies performed by Anders Ericsson (The making of an expert) which clarifies that you need 10 000 hours of practice to become a high performer - to master your area of expertise. If you consider that boys in Brazil play footbool many hours a day from a very early age, young people in Ethiopia and Kenya run every day to school (maybe 10 km one way) - it is not that strange that some of them have the ability to continue with hard work to achieve mastery. A 13-year old boy in Brazil has already done his 10 000 hours of training.

So, how to identify talents? Rasmus showed two criteria that are the most important to focus on:
1. Always look beyond the result
Many people look for performance at an early stage in a persons development, instead of looking for potential. Those are two different things. Studies say that among early teens playing football or icehockey, the ones that are percieved to be the best are the ones born in January-March. Why? Because they are often more physically developed than their peers, they seem to have more talent. Instead of looking for performance, you really should look for potential taking away the interference.
2. Put hunger over skills.
This is all about motivation. Winners are often found by people that have had to fight for their desires starting at an early age. Carol Dweck has done some studies (see clip below) that clearly shows that praising young people for "trying out hard" is much better than praising them for "being smart". This implies that you actually should look for those people that are willing to try out new difficult things and also are willing to fail, instead of looking for those that always succeed doing the same thing every time.

Rasmus told us a quote from James Cameron:

Personal reflections: This quote has a straight link to the famous business leadership concept and book by Pekka Viljakainen - "No Fear". Regarding how to identify leaders och high performers in business context, I think the above is aligned with my Leadership formula (Hedins ledarskapsformel) that says that leadership result is of course depending on a decent level of knowledge and skills in the area you work (also measured by IQ and EQ), but mostly on the motivation and energy (the drive) that you put into your work.

So, please have a look into parts of the breakfast seminar that was found via YouTube: "A winner is a loser who evaluated himself", by Rasmus Ankersen:

And remember, whereever you are:
See the story about Simon Kjaer, a famous danish football player, starting out as a lazy and arrogant 15 year old player:

Finally, something for all of us that have children. How to communicate and praise good efforts..., Carol Dweck via YouTube:

Less is more than enough

I have found an exformation friend. The YouTube-clip below is done to show how our brain process information (explained in my Tor Nörretranders favourite book "The User Illusion"). We receive most information from our eyes (our visual senses) and it can be measured to about 10 MBit /s. But, our brain only let´s our consciousness be aware of about 40 Bit/s - the rest are stored (or hided) and can only be retrieved via our subconsciousness or our intuition.

Some quotes from the clip:


if so much information
becomes exformation
shouldn´t designers put less stuff
into their work?
less is more
than enough
From YouTube: A Bandwidth for Humans is based on the book "The User Illusion" by Tor Norretranders:

The Golden Rule by Stephen Covey

What is the common nominator between the Golden Rule, Lady Gaga and Justin Timberlake?

I have earlier written two blog posts about the Golden Rule, (den Gyllene Regeln samt Gyllene Regeln 2.0) where I explain the need of an update of this universal rule. When reading "The seven habits of highly effective people" by Stephen Covey, I came across his definition of the Golden Rule, and amazingly, he has understood it the same way as I have proposed.


The Golden Rule says to "Do unto others as you would have others do unto you". While on the surface that could mean to do for them what you would like to have done for you, I think the more essential meaning is to understand them deeply as individuals, the way you would want to be understood, and then to treat them in terms of that understanding. As one successful parent said about raising children, "Treat them all the same by treating them differently."

Stephen Covey defines three public habits; Think Win-Win, Seek first to understand, then to be understood and Synergize which all boils down to Empathic listening and seeking the Middle way. By acting like this, you create a solid foundation for effective interdependence.

So, finally some words of wisdom... Whether you are a leader or a parent, when you communicate to your personnel or to your children:
Treat them all the same by treating them differently!

It´s great to be able to present a newly created exformation magic7 music video list for January 2012. This list contains a new sexy song from Rihanna, a beautiful Laleh song, an Adele super hit, the Maroon 5 Jagger, a Jay-Z/Alicia Keys Empire, a Chris Brown Strip, in One Direction, the Rasmus Seebach natteravn, Petter Krafter and a Happy New Year from Abba.

A blog for inspiration with my humble reflections about leadership and effective communication - focusing on information, intuition, internet, psychology, happiness and exformation. Sometimes in Swedish, sometimes in English.