Sometimes we forget what communication is all about. It is not about what we say, the information. It is about what we want to express and share, in the conversation. Below wonderful YouTube video explains it all - back to basic!

And remember - it´s all about exformation! 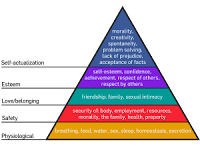 I am glad to share this YouTube clip related to Exformation, presented in a Pecha Kucha way. Steve Davis from FacilitatorU.com is one of the internet evangelists spreading the knowledge about "using context to build capacity in communication".


"In a world struggling to find meaning; embrace Exformation"

Thailand from a Dan Brown perspective

Dan Brown has done it again. His latest book "The Lost Symbol" is equally good as any other book he has written, I think.
I read somewhere in the blogosphere that the key for Dan´s success really is his enormeous capabilities in the skill of storytelling. I will try to adopt his way of telling a story using my current setting in Thailand, on my family holiday in Khao Lak, using my as good as it gets English.
Here we go:

The Hedin family had decided to go to exotic Thailand this winter. The decision where to go had actually been quite easy. The last time the family was in Thailand they stayed in Phuket, the touristic no1 place in Thailand. But, they had heard from many sources that another place, Khao Lak, was very much worth visiting. Khao Lak is well-known for the world as the Tsunami village that was more or less destroyed Christmas Day 2004. Thousands of people had to run from the beaches and hotel pools up in the djungle to try to avoid the forces from the flooding water. Unfortunately many did not survive.

The Hedin family arrived early in the morning to Phuket airport. They had not slept much during the long flight, Melvin had tried to sleep on the floor without any real luck. Meja, the young sister, actually fell asleep about 1,5 hour before landing so the parents, Marten and Pernilla, let her sleep over the breakfast session. The breakfast was an astonishing mixture of scandinavian yoghurt, local Orange juice, bread that was baked with love in central Europe,swiss cheese and lastly a plate with fresh Thai fruits, which was hard to grasp though they still had not landed on Thai ground.

At 05.55, exactly on time, 10 hours and 25 minutes after having had the take off from Sturup airport, the plane, a Boing 747-100 from Thomas Cook airlines, hit the ground at Phuket airport. The air that hit the family in their faces when exiting the plane was humid and hot. It reminded them of their last visit, in April 2009. All good memories. But, they were all so tired.

- What is this queue, Meja asked. It is the queue for visitors that want to enter Thailand, her father said calmly.
- Why can we not just go to the hotel and jump into the pool, Melvin asked. Well, we have to show the airport guards our passports.
For some reason, they took the slowest queue of them all. Finally, after a time that felt like forever, they got to the passport stand. Every each person had to go in front of a small camera, standing still for 10 seconds so the photo could be taken, waiting for the assistant to review the content of the passport and the arrival card, then finally it was OK to cross the border to Thailand...
But, it was not over yet. The luggage was of course not there yet. The sign said that the luggage from fligh TC1713 from Sturup should arrive within 8 minutes. It was time to take a pee. Marten wondered why it is so that luggages arrive in the order they do. If you have 4 suitcases that are checked-in at the same time, should it not be so that the normal outcome should be that they arrived together and not in a totally randomly fashion. He reminded himself that he must Google it some day.

WELL, NOW I CAN NOT WRITE DAN BROWNISH ANY LONGER - IT IS PRETTY EXHAUSTING!
Upplagd av Hedin Exformation kl. 17:01 1 kommentar:

This month I have put together an exformative list of videos that I think will embrace you and give you comfort during this last month before spring time is here for real. Some Gaga, rather P!nk, a wedge of Seebach, a Blunt, impressive OK Go, good old Roxette and direct from Thailandish car radio: Europe.